If you’re hoping to become a travel nurse and work in areas outside of your home state, obtaining the proper travel nursing licenses may seem overwhelming.

Fortunately, Compact nursing states have streamlined the licensing process, making it easier for nurses to gain the proper qualifications to work in multiple states that have passed legislation to implement the Nurse Licensure Compact (NLC).

However, not every state has implemented the NLC. So, how do you know if your state offers or accepts the license?

In this article, you’ll discover a compact nursing states list and map to find out if your state or the state you want to work in recognizes the NLC. If not, don’t worry, you still have options. However, if you can obtain an NLC license, the process of finding travel nursing contracts will be much simpler.

Additionally, you’ll learn everything you need to know about the NLC and eNLC, including a brief history and licensing requirements.

What Are Compact Nursing States?

Compact nursing states are states that recognize the Enhanced Nursing Licensure Compact, or eNLC. This is a multi-state license that allows nurses to work in other compact nursing states, avoiding the costly and time-consuming process of applying for single-state licensure each time they work in a state outside their primary residency.

In fact, the report concluded that single-state licensure was costly, restrictive, and only vaguely related to quality of care.

So, in 1997, the National Council of State Boards of Nursing (NCSBN) implemented a multi-state licensure model that allowed nurses with the appropriate license to practice in other compact nursing states.

What Is the NLC?

The purpose of the NLC was (and the purpose of the eNLC still is) to allow nurses with the proper license to practice in other compact nursing states that recognize the legitimacy of the license.

By 2000, the first states to join the nursing compact included Texas, Wisconsin, and Utah.

However, some state nursing boards, like the Ohio Nurses Association (ONA), criticized the NLC for a number of reasons. They argued that the NLC:

The NLC included about 25 states in 2015, but some were wary of the issues raised by ONA over the preceding 15 years. To deal with these worries, the NCSBN developed a new compact nursing state model.

What Is The eNLC?

To address the concerns raised by NLC detractors, NCSBN developed the Enhanced Nursing Licensure Compact, or eNLC, in 2015. The eNLC included:

In January of 2018, the old NLC was phased out, and nurses who hadn’t switched to the new eNLC license weren’t able to practice in other compact nursing states.

By 2019, the eNLC was recognized by 31 states, and today there are 39 compact nursing states and territories, with more set to join the agreement pending legislation.

Why Are Compact Nursing States Important?

Compact nursing states are important because they allow nurses to practice in multiple states without having to apply for a new single-state license every time they work in a new state. This helps nurses avoid the costly and time-consuming process of applying for and renewing their licensure each time they work away from home.

Overall, nursing compact states benefit everyone involved in the delivery of healthcare.

The following compact nursing states map indicates the status of each state in the US.

To see an interactive version of this map, click here.

There are currently 39 compact nursing states and territories in the United States. All of the following states have passed legislation approving compact nursing licensure, though a few of these jurisdictions are still awaiting implementation:

While the states we mentioned in the previous section have all either passed or implemented legislation to enact the eNLC, the following states have introduced, but not yet passed, legislation to become a compact nursing state:

What States Don’t Recognize The eNLC?

Unfortunately, not every state has enacted or introduced legislation to become a compact nursing state. The following states and territories are not eNLC members and have no plans to recognize the license in the immediate future:

While the states listed above do not recognize the eNLC, it doesn’t mean you can’t work as a travel nurse in those jurisdictions–it just means the process for obtaining licensure will be more challenging.

To learn how, check out the section of this article titled “What If My State Is Not A Compact Nursing State?”

To obtain an eNLC license, your primary residence must be in a compact nursing state that recognizes and has implemented the eNLC license.

Additionally, per the NCSBN, you must meet the following requirements, which are uniform for every state:

How To Obtain Your eNLC License

Obtaining your eNLC license is actually a pretty straightforward process.

The first thing you’ll want to do is confirm that your primary state of residence is a compact nursing state. Then, make sure you meet all the requirements we listed in the previous section to ensure you’re eligible for a multi-state nursing license.

From there, you should be able to go to your state board of nursing’s website to upgrade your RN license to an eNLC license.

Assuming you meet all the eligibility requirements, you should be able to follow the website’s instructions to upgrade your license. Look for a link that says something along the lines of “eNLC Application” or “Apply for Multi-state License.”

After your application is reviewed and approved, you should get your eNLC license in the mail. The time it takes to receive the license can vary from state to state, so don’t hesitate to contact your state board of nursing to find out how long it may take to arrive.

What If My State Is Not A Compact Nursing State?

If your primary state of residence or the state you want to work in is not a compact nursing state, it doesn’t mean you can’t work in another state. However, the process for obtaining the proper licensure will take longer and be more complicated.

In fact, you’ll have to apply for a single-state license in every state in which you wish to work. This can be a time-consuming process, so it’s best to start applying as soon as possible.

Additionally, you can hold multiple single-state nursing licenses at once, but you’ll have to renew each license and complete required continuing education credits to maintain them. The good news is that your CEU’s can be used to fulfill license renewal requirements for multiple licenses.

Finally, in order to determine single-state license requirements, you’ll need to consult each state board of nursing in which you hope to hold a valid license.

Can You Transfer Your Nurse License To Another State?

If you decide to move to a new state as a nurse, you will need to update your licensure. NCSBN defines your primary state of residence as:

“The state (also known as the home state) in which a nurse declares a primary residence for legal purposes. Sources used to verify a nurse’s primary residence may include driver’s license, federal income tax return or voter registration. PSOR refers to legal residency status and does not pertain to home or property ownership. Only one state can be identified as the primary state of legal residence for NLC purposes.”

Below, we detail various different scenarios you may face when moving as a nurse.

If you live in a compact nursing state and change your primary residence to another state that recognizes the legitimacy of the eNLC, you’ll need to apply for licensure by endorsement in the new state.

The good news is that you can practice with your old license until the new one is issued, because both states accept the eNLC. However, it’s still best to apply for licensure in your new state as soon as possible.

Once your new eNLC license is issued, the old one is considered inactive.

If you move from a compact nursing state to a non-compact state, you will need to apply for a single-state license by endorsement.

If you move from one non-compact state to another, you will need to apply for a new single-state license in the state you’re moving to.

Since neither state offers a multi-state license, you will need a separate single-state license for the state you’re moving to. Therefore, it’s best to begin the licensure application process as soon as possible, since you won’t be able to practice in the new state with your old single-state license.

The final variation for nurses changing their primary state of residence is moving from a non-compact to a compact state.

In this scenario, you’ll again want to apply for licensure in your new state as soon as possible, because the single-state license you hold in the non-compact state won’t be acceptable for practice in your new residency. However, you’re able to apply before or after the move.

The good news is that once you obtain licensure in the compact state, you can upgrade to an eNLC license. This will give you the ability to work in any other compact state without having to apply for a new license.

Additionally, your single-state license in the state you moved from will still be valid until it expires.

Compact nursing states and the eNLC license make working as a travel nurse much simpler than having to apply for single-state licenses. Since one license is valid in multiple states, the often-complicated, costly, and time-consuming process of obtaining licensure is minimized and streamlined.

Whether you live or want to work in a compact nursing state or not, there’s no denying that travel nurses have a lot of opportunities to explore the country and earn a much higher salary than their resident nurse counterparts.

To find a travel nursing placement suited to your interests and needs, click here to explore your options!

The following are frequently asked questions regarding compact nursing states.

Do I Need To Retake NCLEX For Every State I Practice In?

No, the NCLEX is a national exam that is uniform for each state, so you only need to pass it once.

Can An APRN Hold A Compact License?

How Many States Are Compact Nursing States?

There are currently 39 states and territories in the United States that are compact nursing states.

What Does NLC Mean In Nursing?

NLC stands for Nursing Licensure Compact, and it is the predecessor of the eNLC.

What Does eNLC Mean in Nursing?

eNLC stands for Enhanced Nursing Licensure Compact, and it is the successor of the NLC.

What’s The Difference Between NLC and eNLC?

The NLC and eNLC are both multi-state agreements allowing nurses to practice in any compact nursing state as long as they hold the license.

However, the original NLC was phased out in 2018 in order to fully implement the new eNLC, which created additional licensing requirements and provisions regarding disciplinary action and required criminal background checks.

Home Health Nurse: Salary, Duties, and How To Become One

A Home Health Nurse provides one-on-one care to patients in their homes. Learn everything you need to know about this type of nurse here.

There are ten BSN programs in Maryland. Discover the five best Maryland BSN programs based on NCLEX pass rate here. 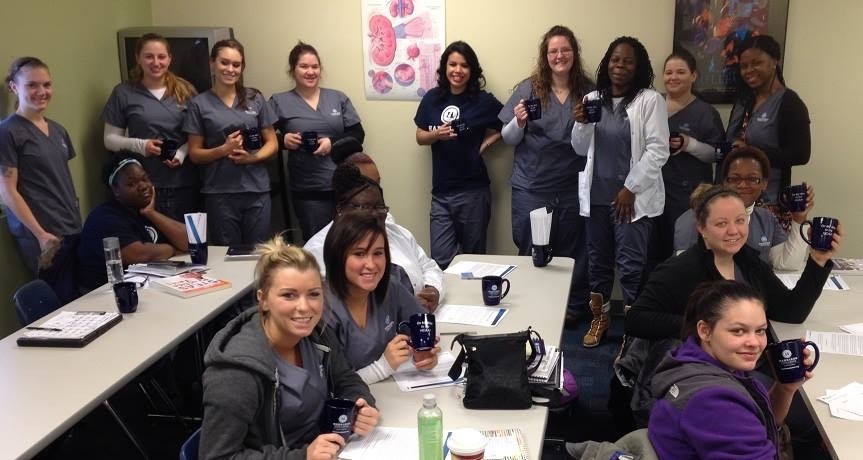